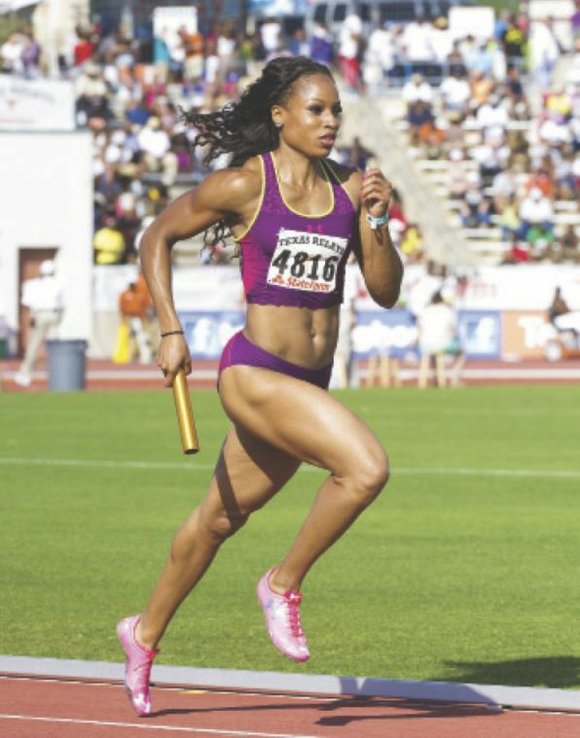 Natasha Hastings is sprinting to the indoor track season

Natasha Hastings is an Olympic gold medal sprinter. The Brooklyn native won her gold medal during the summer of 2008 in the 4x400 relay in Beijing.

The Track and Field competitor will compete next Saturday at the Adidas Diamond league meet at Randall's Island in the Bronx.

“I don't really have a success or failure in mind,” writes Natasha Hastings through email correspondence. “I approach each race without expectation, but instead focus on ways to perfect my race. My focus is execution of the things I've gone over in training and putting together the perfect race race by race.”

With her next race so close she admits her preparation is more mental than physical. In the midst of competition her training schedules is an intense four or five days a week, allowing little time for rest. Her mind must stay sharp and her diet lean.

“I'm very mindful of the things that I eat,” she responds after a question about meal preparation. “But I find it more important to train the mind and focus on visualization.”

Her major competitors on the track and field circuit came up. The point was to try and figure out whom is nipping at her heals or whose heals’ she must catch up with to gage the dynamics of her sport. “At the moment, the 400 field is pretty competitive.”

Her response shows a sign of dedication outside of competition, outside of selfish grandiosity, a concentrated self awareness of her limitations, and a healthy respect for her competitors. An authentic humility, not forced or fabricated, like some, is a breath of fresh air, especially by superstar standards, which is what she has become.

“The last couple races that I have run have been very close,” Hastings added. “Right now, Novlene Williams-Mills, Francena McCorory, Amantle Montsho, and Stephanie McPherson are all running really well.”

Since capturing the gold the gold in Beijing in 2008 she’s repeated the feat at several track meets around the world. At the 2009, 2010, and 2011 world championships, for the same relay event, Hastings duplicated the feat. Actually in 2010 her relay team set a world record.

“The 400 being my specialty would have to be my favorite,” Hastings went on to mention. “I've seen the most success over the years in that event.”

Two weeks ago Hastings competed in the Prefontaine Classic held in Eugene. At the event she posted a season’s best time. Her goal going in to the event was to "improve every time I step[ed] on the track." Last year she was the top American listed on Track and Field News World rankings. She placed 4 overall.

Natasha’s advice for anyone aspiring to follow a similar path as her is to “be patient and focus on the process rather than the outcome.”