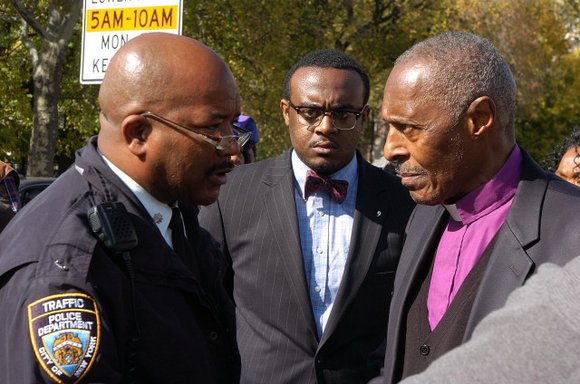 I stared for a long time at the two front-page stories, with hideous pictures and all, in two New York tabloids—the Daily News and the New York Post. I couldn’t believe what I was seeing and reading. When I recovered from one paper, my wife brought me another. What was it all about?

It was the regurgitation of a 25-year-old story about the Rev. Alfred Sharpton being an informant for the FBI. I’ve known Sharpton for nearly 50 years. He has been a precocious activist from the day I first saw him. He was 11 years old. He was carrying voter registration forms.

When he was 16 years old, he was the youth leader for New York’s Operation Breadbasket, the economic arm of Dr. Martin Luther King Jr.’s Southern Christian Leadership Conference. The Rev. Jesse Jackson was the national leader. Dr. William A. Jones was the chairperson. I was the executive vice chair.

Through the years, Sharpton and I have participated in countless local, national and international activities (including many arrests for civil disobedience), fighting to make America and the world a better place for all, especially for the “huddled masses yearning to be free.”

Obviously, I was with him when the story first broke. It was around the time Michael Griffith was chased to death in Howard Beach by a white mob. There were many other instances of injustice. I didn’t attach any importance to the story then, and even less now.

At that time, Sharpton had indicated that to protect himself from the mob, he had gone to the FBI for help. He had cooperated with them to apprehend the bad guys. Concomitantly with the story, we were fighting other burning issues 24/7, especially the police’s abuse of power. In fact, we had tied up the transportation system by sitting on the subway tracks until we were led away to jail by the police.

But for the sake of argument, let us say, “He did all those wicked things of which he was accused.” Are we going to punish him for what he did 25 years ago? If so, are you prepared to treat your family and yourself the same way? Are you ready to be headlined on the front page with horrible pictures?

The Bible tells the story of a woman who was accused of adultery, which was a death sentence at that time. Jesus said to the accusers, “You, who are without sin, cast the first stone.” The only things that moved were the accusers as they backed away. Beware! Those who refuse to forgive put themselves above God, and the callousness of their hearts will subject them to judgment.

Rather than try to dig up past misdeeds, we should heap praise upon Sharpton for the good work he has done and is doing. New York never went up in fire and smoke as other cities did largely due to the work of Sharpton and others whom you are perpetually vilifying. They (we) provided legal channels for abused people to express their “righteous indignation.”

Publicly and privately, I’ve often said of—and to—Sharpton, “He manifests one of the attributes of God. The Bible declares that God created the world out of nothing. Sharpton has recreated himself. He has told us of his dysfunctional family. He has created the National Action Network, one of the most powerful, effective organizations in the country. He personifies Rudyard Kipling’s classic phrase, ‘He walks with kings’ and keeps the common touch.”

If we must single him out, let us give, if you prefer, “the devil his due.” Say of him, especially to the youth, “Here is a man, in spite of a horrendous childhood, mountainous obstacles and questionable decisions—for none is perfect.” The Bible says, “All have sinned and come short of the glory of God.” Sharpton has risen to dazzling heights of achievements. No matter who you are and where you come from, you can do the same.