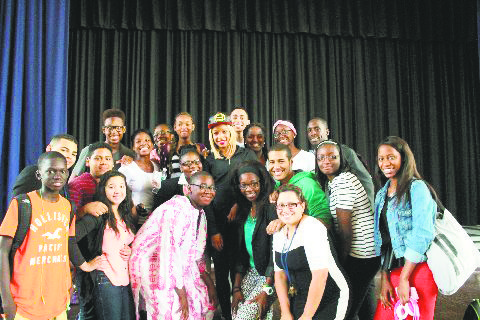 U.S. Olympian Natasha Hastings (center of photo) returned to her alma mater A. Philip Randolph High School to greet and spend time with the students.

For the first time since graduating in 2004, on Friday, Sept. 20, track star Natasha Hastings returned to A. Philip Randolph Campus High School in Harlem. She had lunch with the track team, and then the school’s seniors went to an assembly, where she answered their questions, some of which were serious and some funny.

U.S. Olympian Natasha Hastings (center of photo) returned to her alma mater A. Philip Randolph High School to greet and spend time with the students.

“It was nice being back and seeing familiar faces, some of my old teachers. The school does look a little different. It was good to see the new and old faces,” said Hastings, 27, one of the top-ranked sprinters in the world.

The students wanted to know about her training as well as some of her experiences as an athlete. She discussed her experiences at the 2008 Olympics, where she won a gold medal as part of the 4x400 relay team, and the World Championships, where she won relay gold medals in 2007, 2009 and 2011. At the 2013 World Championships in Moscow, Hastings qualified for the final in the 400 meters (placing fifth) and won a silver medal in the 4x400.

“We also talked a little bit about school, preparing to apply for colleges, how I chose my school [University of South Carolina],” Hastings said. “Some silly questions. My old gym teacher was at the assembly, and they asked if he was the same when I was in school.”

The students wanted to know how Hastings, who grew up in Brooklyn and Queens, got started in track. “I was pretty much born into the sport,” she said. “Both of my parents ran. It was something that naturally happened.”

The A. Philip Randolph visit was part of an extended trip to New York, which included spending a couple of days with friends in Harlem. She was also toasted by friends, including fellow 400-meter runner Francena McCorory, at a party on Saturday night.

“I love the hustle and bustle of New York,” said Hastings, whose 2013 season finished with a win in Brussels earlier this month. She’ll start training for 2014 in about six weeks. “The first thing I want to do when I come [to New York] is get on the subway … I get a rush every time I come back.”