Remembering the life of Nelson Mandela 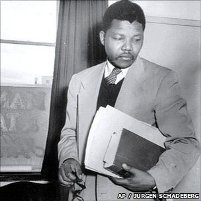 Nelson Mandela, was born Rolihlahla Mandela on July 18, 1918 to Nkosi Mphakanyiswa Gadla Mandela of the Madiba clan. Mandela was born in Mvezo, Transkei located in the southeastern region of South Africa.

According to the Nelson Mandela Center of Memory biography, after his father’s death in 1927, Acting King Jongintaba Dalindyebo became Mandela’s guardian and Mandela lived at Great Place in Mqhekezweni. While living there he listened to countless stories told by his elders about the wars of resistance fought by his ancestors against colonialism. According to the organizations biography these stories are what inspired Mandela goals to contribute to the fight to free South Africa’s people from the oppressive rule of its government.

It was during primary school that Rolihlahla received his Christian name “Nelson” from his teacher. He received the name Nelson in tradition of giving all students Christian names. In an interview with the Washington Times Mandela speaks about this tradition, he said, “On the first day of school my teacher, Miss Mdingane, gave each of us an English name. This was the custom among Africans in those days and was undoubtedly due to the British bias of our education. That day, Miss Mdingane told me that my new name was Nelson. Why this particular name? I have no idea.”

Mandela completed his studies to earn his BA from the University of South Africa and graduated at Fort Hare in 1943. He also received a two-year law degree, which he put to use in 1952 when he partnered with Oliver Tambo to established the South Africa’s first black law firm, Tambo and Mandela.

In 1944, with the help of Tambo and Walter Sisulu, Mandela founded the African National Congress Youth League (ANCYL). The ANCYL in the 1940’s organized strikes and protests against laws of the apartheid system.

Later In 1952 he was chosen as the National Volunteer-in-Chief of the Defiance Campaign, which used civil disobedience to protest against laws that unjustly limited the movement of Black and Colored South Africans. The laws broken by protesters were:

He was then arrested and served nine months of hard labor under South Africa's suspicion of communism act for his participation in the campaign.

Mandela was arrested again in 1955 in a countrywide police swoop that charged 155 activist. This lead to the 1956 treason trials, which he was acquitted of in 1961.

The famous Rivonia trials occurred in October 1963. Mandela and nine others were charged with sabotage. Mandela was sentenced to life in prison to be served at Pollsmoor prison.

Under apartheid Mandela served 27 years in prison where he continued his mission and teachings. His message of equality gained popularity around the world. In 1985 South African President PW Botha promised Mandela that he would be released if he renounced violence. Mandela rejected this proposition and remained in prison.

After his release in February of 1990, Mandela continued his work and won a Nobel Peace Prize in 1993 with FW de Klerk for their work toward the termination of the apartheid system in South African and for working to establish a new democratic South Africa.

In 1994, running unopposed Mandela was elected as the first black president of South Africa. This closed the era of apartheid. He gave a moving speech from a balcony at Old Cap Town city hall in 1994 emphasizing to the people of South Africa that, “We place our vision of a new constitutional order for South Africa on the table not as conquerors, prescribing to the conquered.”

In his 95 years of life Mandela married three times and had six children.