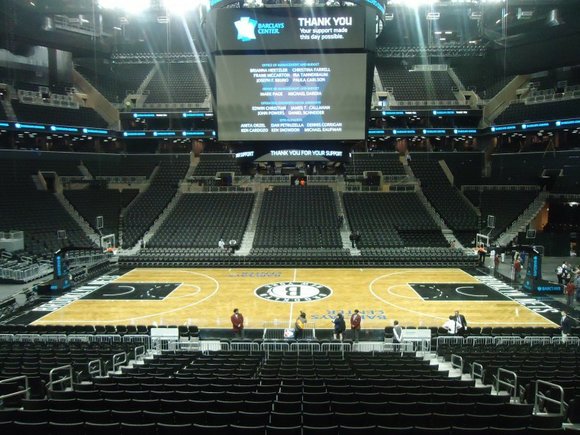 It's here, and the Barclays Center isn't going anywhere.

"Mr. Mayor, you should be proud of what your administration has done," said Bruce Ratner, chairman and CEO of Forest Ratner Companies, during the opening ceremony of the arena's unveiling last Friday afternoon. Ratner called the 675,000-square-foot structure the "most architecturally beautiful arena in the world."

The beauty talk dominated and, for one day, diminished the fight over the arena's existence.

Bloomberg said the arena means more job opportunities for New Yorkers and "good union jobs ... at a time when our city's economy needs that shot in the arm." According to the mayor, while the rest of America has only gotten back 40 percent of the jobs lost during the recession, New York City has gotten back 200 percent.

The arena will be the home of the Brooklyn Nets basketball squad, which just left the Prudential Center in Newark, N.J. It will also hold concerts featuring the likes of Barbara Streisand, the Rolling Stones and Justin Bieber. College basketball conference tournaments, like the Atlantic 10, will also be held there. Eight sold-out shows by Jay-Z will be the first official events at the arena. Overall, Barclays Center spokespeople said they have over 200 dates booked already.

According to the media guides who provided reporters with a tour of the arena, while the bigwigs dined at the Calvin Klein Courtside Club on the building's ground-level post-news conference, the Barclays Center holds close to 18,000 people for basketball games and about 19,000 for concerts. The number of seats for events remained lost on those who stood outside and upset with the city, the mayor, Ratner and the sight of Barclays Center itself.

Gib Veconi, treasurer of the Prospect Heights Development Council, spoke with the AmNews after the protesters held a news conference of their own. He had something to say to those who file Ratner's baby under the label of capitalism.

"It's not capitalism when the public money is being spent," said Veconi. "Capitalism is using my money to build something. Not using your money. The public put $300 million of direct aid into this project ... Not only that, but the value of the tax-exempt bonds, the value of the zoning overrides, the value of the other tax breaks that the project has received, it runs into billions of dollars." Veconi said that money could've been better used to help with job creation or housing.

"The people have a right to be outraged," Veconi said.

New York City Councilman Jumaane Williams was in attendance at the ceremony. While he felt that Friday was "a day to celebrate Brooklyn," he also expressed concerned about how the local residents will benefit directly.

"My biggest concern is to make sure we fulfill the CBA [collective bargaining agreement]," Williams told the AmNews, "and get as much affordable housing and union jobs as possible. I think that should be paramount and it's just as important--if not more important--than the physical structure of Barclays."

While much has been made of Jay-Z's involvement with the Nets as a minority owner and all-around influencer, Veconi wondered aloud if anyone else would benefit from Shawn Carter's influence.

"He's spinning that into a tremendous opportunity for his brand," said Veconi. "He's got a restaurant. He's got a stake in clothing and in the merchandise that's being sold by the team. So Jay-Z made out great.

"He's obviously a smart businessman," continued Veconi. "But I don't know what it did for the people of Marcy Houses."