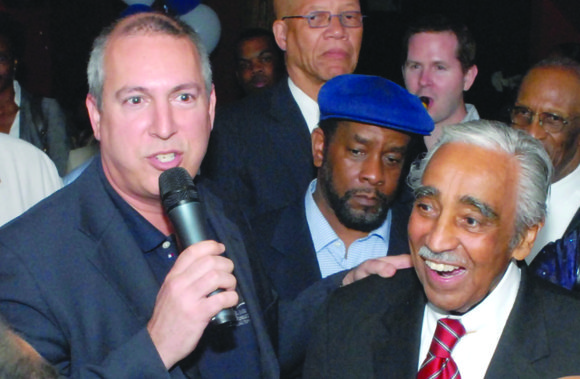 To hear his critics and opponents tell it, Rep. Charles B. Rangel was too old, too beleaguered, too ethically challenged to continue in office. The voters in the newly drawn 13th District were not convinced.

With nearly 90 percent of the votes in, Rangel had a commanding lead over Adriano Espaillat, 45 to 39 percent.

"If, after more than 40 years in Congress, they don't know who I am, they will in the next two years," Rangel told an enthusiastic throng of supporters outside Sylvia's restaurant in Harlem. "We are coming together and the people have shown they have confidence that I can bring home the resources."

Not since he defeated Adam Clayton Powell Jr. in 1970 had Rangel faced such a challenging re-election bid, with four aggressive contenders snapping at his heels. But "The Lion of Lenox Avenue," as he is affectionately known, roared to victory, leaving Clyde Williams (11 percent), Joyce Johnson (3.2 percent) and Craig Schley (1.5 percent) trailing far behind.

It wasn't the landslide victory that Adam Clayton Powell IV had predicted--Powell was among many prominent political leaders to endorse Rangel--but it was enough to overcome all of the obstacles that seemed at one time difficult to hurdle.

"We put together an incredible team, and I'm comfortable with all the support I've received," said Rangel, with his wife, Alma, nearby. And after repeatedly thanking the voters who have, in effect, returned him to Congress for a 22nd term, he blasted members of the GOP and their attempts to suppress the vote. "That's the only way they can win."

It was widely believed that Rangel would not be able to come back after being censured by the House Ethics Committee two years ago; could not summon the strength to recover from back surgery; or could not quiet the increasingly loud detractors who no longer viewed him as the veteran lawmaker of consequence. But a wounded Rangel proved no less formidable than the representative of the past.

"I thought he was at last going down to defeat because of all the charges against him, that the other Black candidates would split the vote and give the race to Espaillat," said Michael Shaw, a longtime activist. "But you can never underestimate Rangel, never count him out."

Well, Rangel has been counted in, and now the voters in his district are poised to see if he can bring home the bacon, as he has done so resourcefully for more than 40 years.

"Pick a fight with us and you have the Bronx and Harlem to contend with," Rangel roared to the delight of Assemblyman Keith Wright, former Gov. David Paterson and his father, Basil, Council Member Inez Dickens, Bronx Borough President Ruben Diaz Jr. and countless other notables gathered at the victory celebration.

"Words cannot describe my overwhelming gratitude to the voters of the 13th Congressional District of our great state for believing in me. I welcome this special privilege to serve the people of the Bronx and those in Upper Manhattan whom I have had the honor to represent in Congress in the past. I will not let them down," Rangel said later in a press statement.

"I hope to begin the healing process of some of the division that was created during the course of the campaign, and I am looking forward to meeting with all of my constituents and community leaders in the new district so we can work together on improving the lives of everyone living in Harlem, El Barrio, Washington Heights, Inwood and the Bronx," he continued.

"And a special thanks to all my supporters, staff and volunteers who helped carry me through. Thank you for your continued friendship and unwavering faith in me."