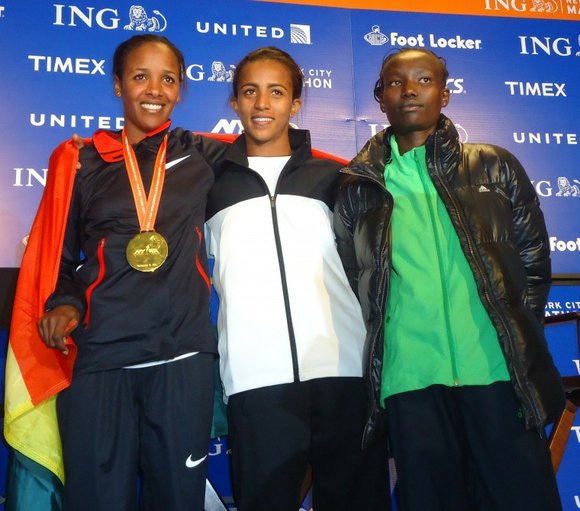 But, of course, the journey to the finish is much more interesting than the end.

Keitany ran at unusually fast pace to start the race and spent a huge chunk of the marathon by herself with Dado and Deba seemingly racing against each other for second place.

"Because she'd been running so fast, I didn't imagine we'd catch her," said Deba during the post-run news conference. Her and Dado agreed that even their own pace was too fast for them. Deba approached the podium limping a bit due to muscle cramps in her right leg.

Dado, using a translator for help, spoke few words, but let reporters know of her joy for winning the race. "'I'm very happy. It was very very great," she said. "It was a tough race, but I'm happy to have run New York."

Keitany, on the other hand, tried to explain how she lost her lead.

"My knees got me," said Keitany. "I was a feeling a little bit of fatigue in my leg." Some of that fatigue could've been the energy wasted at the beginning that opened a lead of over three minutes on the rest of the pack, but slowing down near the end. Did running so fast to start the race take its toll on Keitany? If she had the chance to come back to New York in 2012 and run again, would she change her running style?

"If my body doesn't react the same...," said Keitany as she trailed off and regained her composure. "I will not change."