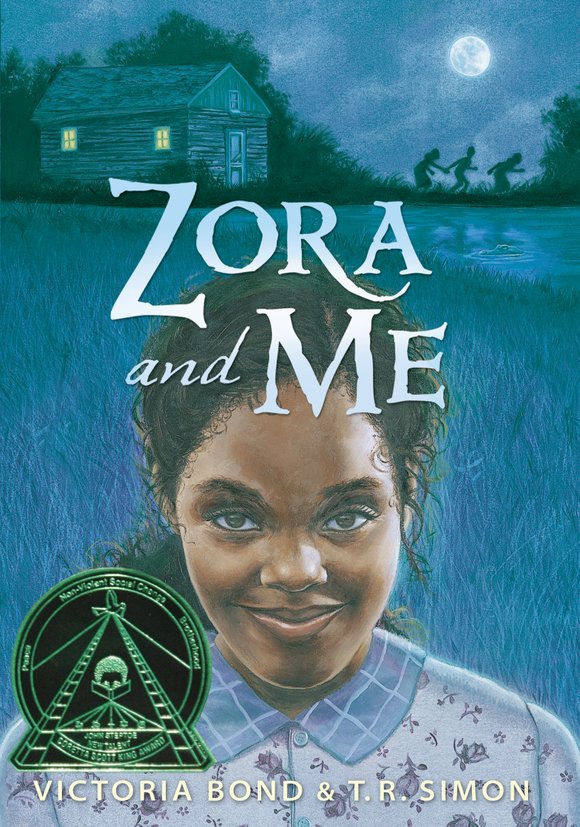 Hey tweens, what's up? Wel- come back to GoGAB's Tweens- ville. This week, we're off on another exciting adventure- we're going down South to a very vibrant setting. There, we'll meet some very interest- ing characters in a fictional, coming-of-age story centered around the real-life African- American author Zora Neal Hurston.

We will find ourselves caught up in a very suspenseful plot and pay attention to some very rich dialogue by the characters as we try to figure out the baf- fling mystery in the fantastic title, "Zora and Me," by Victoria Bond and T.R. Simon.

But first, let's find out about the person who inspired the authors to write this totally engaging book.

Hurston was a great author who was born in 1891 in No- tasulga, Ala. The authors of "Zora and Me" do a great job of providing us with background information about Hurston. (You can also do your own Google search to learn more.)

We learn that Hurston, the fifth child of John and Lucy Hurston, had seven siblings in all. Her dad was formerly enslaved (not free); however, after he gained his freedom, he became a preacher and even- tually the mayor of Eatonville, Fla. Hurston's mom was a schoolteacher.

She was very close to her mother because they had simi- lar characteristics. For exam- ple, both of them loved to read, and they were women with very strong opinions. However, when Hurston was 13, her mom died and her father remarried. Unfortunately, Hurston and her dad's new wife did not get along. Consequently, after one awful disagreement, the teen- ager went out on her own.

Hurston struggled in vari- ous jobs to support herself while attempting to finish high school. One of her jobs was working as a maid for a singer in a theater group that traveled from place to place. Hurston loved to see the per- formances and realized that she also loved to perform.

By 1917, Hurston had relo- cated to Baltimore. Although she was 26 years old, she still did not have a high school di-

ploma. Determined to get one, she pretended to be 16 and returned to school. Upon com- pleting high school, she con- tinued her education at How- ard University in Washington, D.C., and then in New York at Barnard College, where she was the only Black student.

THE HARLEm RENAISSANcE ANd BOOkS PUBLISHEd BY ZORA NEALE HURSTON

After moving to New York City in the 1920s, Hurston's work as a writer began to get noticed. Soon she was acknowl- edged as one of the movers and shakers of the Harlem Renais- sance, alongside such great fig- ures as the poet/writer Langs- ton Hughes and the singer/ actress Ethel Waters.

Several of Hurston's books were published during this period, including "The Gilded Six-Bits," "Jonah's Gourd Vine" and her most popular novel, "Their Eyes Were Watching God," which was made into a TV movie starring Halle Berry.

The setting for "Zora and Me" is Eatonville, Fla. We learn from the authors that Eatonville was "the first incorporated all-Black township in the United States." Twenty-seven African-Ameri- can men established the town shortly after the Emancipation Proclamation.

Eatonville was home for Zora from the time she was a toddler. We learn that this progressive setting gave Zora the opportunity to sharpen her mind and allow her imagina- tion to soar.

The GoGAB Tweensville "Switching on Literacy" ex- perience is a home initiative designed to encourage all of you out there in Tweensville to read. Included in this pro- gram are the seven principles of Kwanzaa.

THE SEvEN PRINcIPLES Of kWANZAA

One of the exciting features of the "Switching on Literacy" experience is that our selected titles will reflect some of the principles of Kwanzaa. These principles will help us to learn many important lessons about ourselves, one another, our fam- ilies, friends and community.

The seven principles of Kwanzaa, with the Swahili

So here we go, GoGAB Tweens-are you ready? Well then, let's turn off the gadgets. Now let's grab a book because it's time to "Go Get a Book in Your Hand!" Let's read, read, READ!

TWEENS fIcTION TITLE: "ZORA ANd mE"

Kwanzaa Focus: All the Principles The Coretta Scott King

Award-winning title, "Zora and Me" (Candlewick Press, 2010), is an exciting rite of passage ti- tle with a baffling mystery that revolves around race, ethnicity and gender issues. It is also an engaging story about friend- ship, family and community.

Hurston was a gifted sto- ryteller and Bond and Simon, the authors, cleverly use this strong point as one of the char- acteristics of their main char- acter, Zora. She stays true to form in holding us captive with the multilayered stories that unfold through her best friend, Carrie. In her role of narra- tor, Carrie's voice is fresh, in- sightful, curious and innocent. Her voice resonates strongly through a barrel of intriguing twists and turns. Through Car- rie's eyes we see the beautiful world of community as well as the ugly realm of racism and hatred as the characters and the town of Eatonville come to

life. The characters are rich,

well-rounded and interesting. The main characters-Zora, Carrie and Teddy-are irre- sistible. They are fourth grad- ers with unique characteristics and talent. We love Teddy's sensitivity, his love for the en- vironment and for the varying creatures on the land. We ap- preciate the fact that Teddy, the first in his family to attend school, is doing well, as is Car- rie. Zora serves as an inspira- tion for both of them because she excels as a student and is at the top of her class.

The secondary adult charac- ters are also memorable. They include Zora's parents, her sis- ter Sarah, who is "daddy's girl," Carrie's hard-working mother, and Teddy's good-natured, hard-working brothers who did not get the chance to get a formal education.

There is also Joe Clarke, the loveable giant whose store- front is the center of activity for the men of the community. This is where the men hang out and where Zora dares to eavesdrop on the adults' con- versation, and where she is bold enough to offer her slant on the mystery of the murder that has just taken place as our story begins.

We also meet Mr. Pinder, the "gator man"; Old Lady Bron- son, the alleged conjure wom- an; and Ivory, a young man in search of someone. There's also the mysterious Gold, a beauti- ful Black woman passing for white who has to deal with her own demons. Mr. Ambrose, the white man who helped to deliver Zora, is another well-

rounded character, just as the brief glimpse of the white man Gold is with triggers our curi- osity.

And then there are the sto- ries. Those wonderful stories about alligators and men who have been killed by them, as well as men who have alligator faces-Zora calls them "gator men."

GoGAB is wild about the Eatonville setting of the early 1900s that colors "Zora and Me." This community is a strong one in which all the members work together. In effect, they serve as a model group utilizing all the Kwanzaa principles: unity, self-determination, cooperative work and responsibility, coop- erative economics and purpose, creativity and faith.

The authors have created a winner in this insightful, well- crafted and well-rounded debut novel. Their unique characters that will live with you for a long time. "Zora and Me" is a must- have for every home, library, school and church library.

GoGAB highly recommends this title for your summer read, Tweensville GoGABbers. It's all that and more!

"Zora and Me" is a GoGAB Kwanzaa Literary Award win- ner.

For this week's titles, please visit Candlewick Press at: www.candlewick.com.

For other titles, you may visit Penguin Group at: www. penguin.com/youngreaders or Random House at: www.ran- domhouse.com/kids.

You may also visit our book- seller affiliates in Harlem at Hue-Man (www.huemanbook- store.com) and in SoHo at McNally/Jackson Booksellers (www.mcnallyjackson.com).

All of these titles are highly recommended by Misani's Go Get a Book in Your Hand (Go- GAB) Literacy Group: Kesia's Teens, Nas +3 Tweens, GoGAB Young Readers for Mom-in- Chief, and GoGAB Youth & MD Men for President Obama and our partners, the Frederick Douglass Academy 1, the ICAD- FTL Festival, Inc. literary divi- sion, the "Switching on Literacy" 2011 Experience Group and the NY Amsterdam News.

To contact the Go Get a Book in Your Hand Literacy Group and the GoGAB Reading Team, please email us at gogetabook@ yahoo.com.