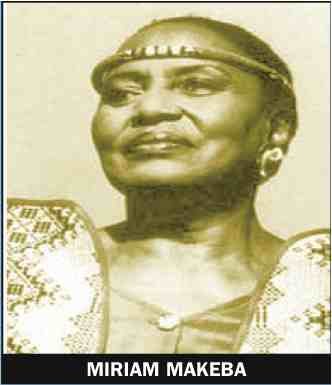 Miriam Makeba, widely known as "Mama Africa,"and whose music was the embodiment of the struggle against apartheid in South Africa, died Nov.10 in Italy after collapsing at a benefit concert at Castel Volturno, near southern Naples. She was 76.

Makeba, according to reports from Italy, collapsed during a performance in support of Robert Saviano, an Italian author who was facing death threats from the Mafia for his expose, "Gomorrah." The audience, calling for an encore, was unaware of the severity of the heart attack. She died later at a local hospital in the Camorra region of the country.

According to Carlo Hermann,an AFP photographer, "There were calls for an encore, and at that moment someone asked if there was a doctor in the house. Miriam Makeba had fainted and was lying on the floor," he said.

To spend her final moments on stage would be in keeping with Makeba's legend and commitment, a musical career that began as a child at the Kilmerton Training Institute in Pretoria, which she attended for eight years. (She was born March 4, 1932 in Johannesburg of a Swazi mother and a Xhosa father.)

She was still a teenager in the late '50s when she performed professionally with a group called The Manhattan Brothers, with whom she toured the United States in 1959.

By the early '60s, Makeba formed her own group, the Skylarks, and later appeared in a musical version of the film "King Kong," and made a cameo appearance in an early anti-apartheid film, "Come Back, Africa," which earned an invitation to pick up an award at the Venice film festival.

It was during these years that she began perfecting her signature songs, "Pata, Pata," "The Click Song," and "Malaika." After her role in "Come Back, Africa," Makeba's citizenship was revoked in 1960 and she was refused entry to the country in order to attend her mother's funeral. She spent more than three decades in exile, living in the United States, Guinea and Europe.

Moreover, her increasingly popular music was banned throughout South Africa. Nonetheless, her global acclaim was not suppressed and gained even more attention by 1965 after she won a Grammy Award for Best Folk Recording with Harry Belafonte for the

album, "An Evening with Belafonte/Makeba."

In her biography, "Makeba: My Story," she poignantly discussed her trials and tribulations, noting, "I kept my culture. I kept the music of my roots. Through my music, I became this voice and image of Africa and the people without even realizing."

She may not have realized the impact of her art, but the world did, and so did a number of outstanding musicians such as trumpeter Hugh Masekela, whom she married and first met when they appeared together in "King Kong."

Nelson Mandela, in a tribute to her, said Makeba was "South Africa's first lady of song and so richly deserved the title of 'Mama Africa.' She was a mother to our struggle and to the young nation of ours."

In 1968, during the height of the Black liberation struggle, Makeba married noted activist Stokely Carmichael (Kwame Ture) and this

union only exacerbated her troubled career, leading to cancelled tours and record deals. For five years, before separating, they lived in Guinea, where they were the personal guests of President Ahmed Sekou Toure.During her stay in Guinea, she served as a delegate to

the United Nations,and in 1986, she was awarded the Dag Hammarskjold Peace Prize.

But a year later, tragedy struck when her daughter Bongi died. Undaunted, Makeba's resilience was once more magnificent during her

It was not until 1990, at the insistence of Mandela, that Makeba returned to South Africa.A year later she made a guest appearance on "The Cosby Show" in an episode entitled, "Olivia Comes Out of the Closet." And in 1992, she starred in "Sarafina," the highly successful musical about the youth uprising in Soweto.

Most recently, there was a rebroadcast on public television of "Amandla!: A Revolution in Four Part Harmony," which was filmed in 2002 and featured Makeba as she recalled the brutality of apartheid.