Adofo Muhammad: Man of principle on a mission 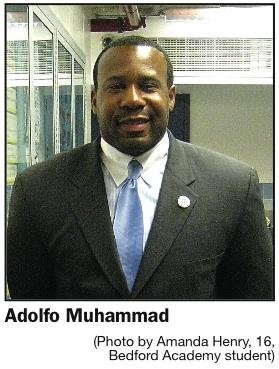 Adofo Muhammad: Man of principle on a mission

A young man from the 'burbs is making his mark in and on one of the inner city's most noted public schools. Hailing from New Rochelle, Adofo Muhammad, 38, reps Bedford-Stuyvesant like he was born in the affectionately named "People's Republic of Brooklyn."

And he has a plan. It is simply to "assist in the monumental task of changing the lives of scholars who have been historically deprived of a viable educational opportunity." Nothing big then, hah? "I want the students in public schools to get the best education that we can give them. That means pulling in the greatest expertise, resources and programs we can," Muhammad told the AmNews.

An incredible advocate for a strengthened and more child-centered education public education system, the single father of 11- and 17-year-old sons recalls how even though he now eats and breathes education--it wasn't always so.

The graduate from New Rochelle High School aptly recovered from an interrupted stint at the historically Black Paine College in Augusta, Georgia, which he had to leave after he got into a scuffle defending a young lady from a handy Neanderthal.

"My mind wasn't particularly keen on higher education at the time," he admits wistfully. But, nonetheless, he refocused and got into Lehman College, where he said he took an extra semester to complete a double major in sociology and Black studies. "I wanted to become a social worker at the time but that didn't work out. So I got a job as an information assistant at a New York public library in the South Bronx. The job allowed me to go to school to get my first master's in secondary education." His second master's degree is in education administration and supervision.

At the same time he was at the library, Muhammad said he also worked as a community worker in a young father's program. "I worked with some brothers dealing with their reality of being young fathers." In the Bronx, Muhammad worked with "a real good brother," educator David Banks, and "we helped develop an environmental impact study, which led to the creation of a school that eventually became Eagle Academy: the prestigious all-boys school."

From the Boogie Down to the People's Republic of Brooklyn, Muhammad got a job at Benjamin Banneker Academy for Community Development as a history teacher. "It had a nice vibe. We organized the male teachers to take a select number of young brothers to mentor them." More than just an academic focus, Muhammad says that they took a holistic approach. "We took a couple of brothers to Malcolm X's gravesite to connect them with the cultural dynamic of New York State and the legacy of Malcolm X.

"Then I got the opportunity to be the assistant principal at MS 258, a serious middle school-- one that was considered a failing school. I worked with the principal, Stanley Walker, and Stephanie Bennet. We all took on the challenge to change the climate and culture of the school, and I think we achieved that. I was there for two years." In the last year, "I had the great privilege of working with the great Jitu Weusi," said Muhammad of the well- renowned Brooklyn educator. "It was a pleasure just to listen to him to get an understanding of how education is always utilized as a passageway to power." Staying in Bedford-Stuyvesant, Muhammad was selected to become the principal at MS 143.

"During my two years there, we created a really strong family atmosphere. We increased math scores by 33 percent and ELA scores by 9 percent. And even though I was brought there as the school was scheduled to close, we were really able to socially develop the students. "The idea was to close without it negatively affecting the students' social and academic development. That was my most rewarding school experience outside Benjamin Banneker. You get immediate gratification when you teach high school students because you see the fruits of your labor when they go off to college, but teaching at this junior high school wasn't delayed gratification because we could see the impact that we were having on the children. It was really wonderful."

Not sure what his move was going to be after MS 143 closed, Muhammad didn't have to ponder long when he got the opportunity to go to Bedford Academy as the principal in August 2008. "This has been a real adventure," Muhammad mused. "This is one of the top schools. It's a hidden jewel in Bed-Stuy with a tremendous graduation rate and significant success in New York State Regents examinations. "This is a school," the principal smiled proudly, "that is full of committed parents who really care about their children's education."

Not at the school quite a year yet, Muhammad has some ambitious plans for the 300- plus students. "My goal, along with the teachers, is to build four majors to expand on what Bedford Academy has already established. We have a relationship with New York University Polytechnic that services our pre-engineering pro- gram. We are starting to build three other majors: pre-law, pre-med and pre-education. Another one of my goals is to expand the critical thinking and social developmental skills."

Muhammad has found his niche, his vocation, his calling, his love--educating the children of the inner city.

Make no mistake about it, Muhammad concludes, "I look at and treat all the children as if they were my own. Any possible way I can collectively develop social and economic ideals in the students I service,I will gladly utilize different protocols to make sure that it happens."